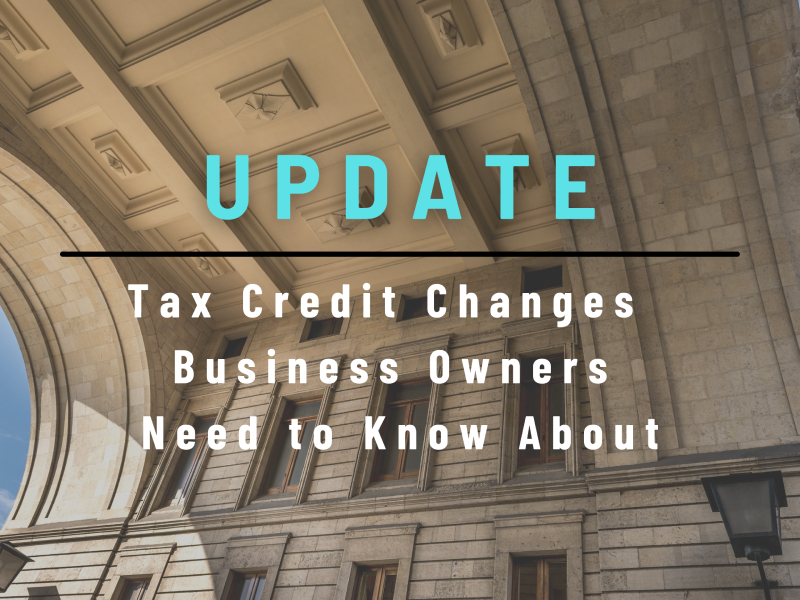 Not many are talking about this, but there have been some MAJOR new Economic Injury Disaster Loan (EIDL) program updates from the SBA…

While I like to steer clear from “recommending” that anyone take out a loan, North Texas businesses seeking low-cost access to capital absolutely should be evaluating the EIDL option in light of the new and highly favorable changes.

Thought you’d be interested. (Though the response time on actually receiving increased funds has widely run the gamut, from what I’m hearing. Don’t expect that this will be a “rapid” infusion of cash.)

That’s just one of a few changes you should know about. The rest, I’ll cover below…

Businesses and their owners the country over have been enjoying some great small business tax credits from the federal government in the last 18 months. But, as 2021 is winding down, it’s important to know that some of them are on their way out.

So, let’s start by talking about the Employee Retention Credit (ERC), which has been a tax boon to small and midsize Dallas County businesses trying to keep people on the payroll. Washington looked to keep the ERC available through the end of the year, but the powers that be on Capitol Hill may pull the plug early as part of that headline infrastructure bill.

Nobody knows right now if the ERC or some version of it will stay alive. Stay tuned.

Small business tax credit changes in the pipeline – maybe
Now we come to what might happen. Lawmakers love to change things, and there are proposals right now to do just that to your taxes … and, of course, not always in a good way. You have to plan for a lot of outcomes, sometimes.

For instance, if your company is what’s called “a pass-through entity,” there’s a new bill in Washington you should know about. The Small Business Tax Fairness Act will try to lower the amount of money you can make and still get the tax deduction for your “qualified business income.”

On the plus side, the Act does also look to expand who can take the deduction to include accountants, financial advisors, attorneys, doctors, and other professionals. Please get in touch if you’re one of these companies and want to know more.

Never a dull moment
Recent events have inspired some to think, “I’ve had it. I’m selling my North Texas business and retiring sooner rather than later.” If you’re in this camp, as far as taxes go, you have two choices: Slam on the brakes or put the pedal to the metal.

Crazy, right? But this schizophrenia can be explained because “tax the rich” proposals in Washington want to hike capital gains taxes and kill the step-up in basis (a type of valuation for tax purposes that historically has protected heirs from larger tax bills).

So, you’re stuck. Sell your business down the road, and you could be socked with a big capital gains tax bill. Leave the business to your heirs instead, and the IRS may wallop them eventually because by that time they’ll no longer have the shield of step-up in basis.

What to do about these small business tax credits from the federal government coming to an end? Well, the discussion about the above on Capitol Hill is still, right now, just proposals. That could change any day. Watch for more back and forth in Washington. And, for the rest of us in the real world, more suspense as we plan for taxes.

If you sell online, watch out
Let’s look at state taxes, too – especially if your Dallas County business has joined the e-commerce boom, and you sell over the internet.

You may have noticed that states (and other tax jurisdictions – watch out here for cities and even towns) are always claiming to be short of cash. With not as many people staying in hotels or eating in restaurants over the past several months, that’s a lot of sales tax states didn’t collect.

So, what are they doing about it? Looking around for small businesses that sell more products online. This actually started a few years ago with a Supreme Court case called Wayfair. It basically gave the green light to states to start demanding that if you sold enough in their area, you have to collect and send back to states sales tax on the purchases no matter where your business is.

Sounds simple – except every state and more than a few municipalities around the county have their own tax rates and deadlines for you to file and pay. And they’ve plenty of penalties to whip out if you mess up.

Typically, you do have to sell about six figures annually in the state or have a set number of transactions – but these rules change all the time.

In this and all tax matters, your business is too valuable to leave to chance.

To your bottom line… and to paying less tax,